THE NEW STANDARD IN

THE SPEED OF THOUGHT

In February’s Frontiers in Quantitative Finance event co-sponsored by Mosaic Smart Data, Professor Olivier Guéant from the Université Paris 1 spoke about how automation in financial trading is taking the next step in market making.

Professor Guéant discussed research that he and his team have conducted on how to build market making algorithms for options on liquid assets. He discussed problems faced by market makers and the models that price-setting is based upon.

He formulated the problem as one of optimisation which is complicated due to the ‘curse of dimensionality’. His research uses ‘The Greeks’ to obtain dimensionality reduction, reducing the problem down to a system of linear ordinary differential equations which becomes easier to solve.

In giving numerical results he referred to assumptions he and his team have made, as well as ideas for further work in the algo market making space.

The event was hosted by the Oxford Mathematical and Computational Finance Group and held at Citi Stirling Square.

A monthly event hosted by the Oxford Mathematical and Computational Finance Group. Providing a forum for academics and practitioners to discuss and debate new ideas in the modelling, management and regulation of financial risks and an opportunity for networking. Students, academics and professionals from the finance and government sector are welcome to attend the seminar and the reception.

Attendance is free of charge but requires prior online registration. 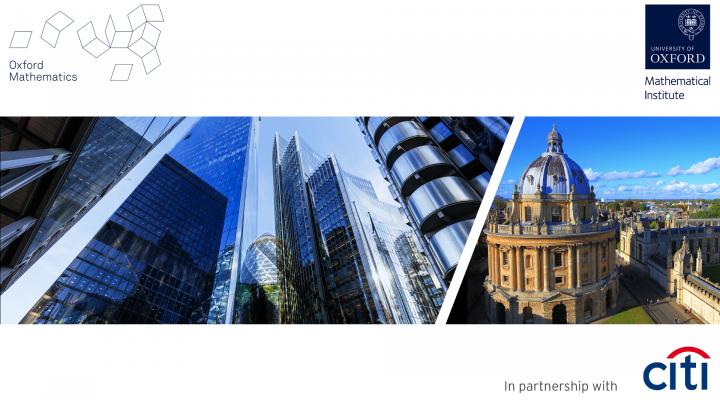