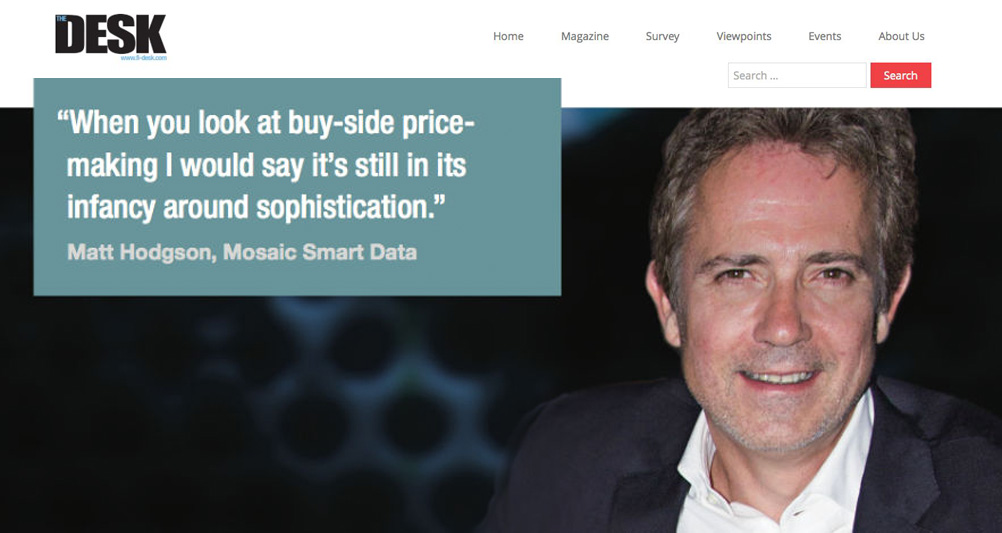 If dealers cannot make prices investors will have to, and many firms are stepping up to offer greater access to pricing and liquidity data. The DESK reports.

“We’ll have to put in for a bigger budget,” said one senior fixed income trader, after seeing a demo of AXA Investment Manager’s pricing data tool.

Presented at the Europe Fixed Income Leader’s event on 10 November 2016 by Yann Couellan,head of trading at AXA IM, the home-grown system was built around a store of market data going back to 2007.

AXA has spent a considerable amount of money to develop a suite of applications that effectively stream prices from banks, giving it a real-time view of the market with historical data that the firm has used, including captured quotes from banks.

It is not alone in making such an investment. AllianceBernstein [AB] built its pre-trade ALFA platform to effectively scrub data in order to support pre-trade decision making and it has made a quantifiable difference. The firm’s head of credit trading, Jim Switzer, told the 2016 US Fixed Income Leaders on 9 June 2016 that as a result of the system, “We can trade when we want, and not when we have to.”

Other investment firms, including Union Investment and Pictet Asset Management are also known to have similar projects underway. Putting the trading desk in the driving seat for pre-trade price and liquidity formation is not cheap but it is increasingly necessary. Pressure to report both performance and pre-trade decision-making to end investors and regulators is increasing the need for quantifiable information around the trade lifecycle. Equally the use of all-to-all trading will require the buy side to make prices more frequently.

“We do expect growth of the all-to-all model – which is why we launched our own offering – and when you are making a price, you need to know where the market is,” says Simon Maisey, managing director for Finance and Business Development at Tradeweb. “There is certainly a trend, fuelled by the rise of cross-asset execution desks, of centralising infrastructure.”

By centralising this information, buy-side desks can build up a picture of the market that can be used to support all of their traders. It supports or even replaces the picture that had historically been provided by dealers, giving an objective perspective on execution quality. A combination of reduced headcount and liquidity provision mean that an important feedback loop that buy-side traders relied upon has been weakened. That has highlighted an information gap that investment managers face, and at a point where transparency is paramount.

“It’s driven in part by the regulatory change,” says Marion Leslie, head of Thomson Reuters’ Enterprise Propositions. “For example when Solvency II came up for insurers, they were not at all used to having to understand the underlying data that underpins their investment. Now, with MiFID II the buy side needs to produce many trade reports, there is going to be a whole explosion of data available that they have never needed to think about before, and services from the sell side are not necessarily available.”

While this puts the ball firmly in the court of the investment manager, there is a disparity between the approach that some of the more advanced firms are taking towards data management and the wider buy-side community.

“Towards the back end of last year we did a survey and perhaps unsurprisingly 95 per cent of financial institutions felt that significant benefit could be gained from a harmonised approach to data management for multiple regulations, but only 12 per cent of those respondents felt that they had a strategic approach,” Leslie says.

“With MiFID II the buy side needs to produce many trade reports, there is going to be a whole explosion of data available that they have never needed to think about before.”

A starting point for the trading desk is to understand the use cases for data infrastructure which can be used to support spend. This includes making prices, providing market-making information to fund managers, referencing counterparts’ axes against market levels and meaningful benchmarking of executions to support transaction cost analysis (TCA).

The price making capability of firms is on a continuum. The most basic approach – taking market data, finding the last trade and putting a spread around that last trade; that really leaves firms hoping for the best says Matt Hodgson, chief executive of Mosaic Smart Data.

“When you look at buy-side price-making I would say it’s still in its infancy around sophistication.”

“A more sophisticated approach is to look at the full range of products that the firm makes prices in, getting in a position to account for illiquidity as well as the volatility in the market, particularly in inventory-based products,” he says. “When you look at buy-side price-making I would say it’s still in it’s infancy around sophistication. To get to that level of understanding around all of the transaction data, you have to be mapping and normalising all of your transaction data.”

He observes that where firms focus only on TCA in relation to execution, it can stem from a lack of understanding that there is great deal of other information which can be injected around the transaction.

Maisey says “We see TCA as part of a wider obligation to fulfil best execution. We also hear concerns from clients about the growing need to explain why did they a certain thing at a certain time [relating to execution] and the administrative burden that creates.”

“We do expect growth of the all-to-all model, and when you are making a price you need to know where the market is.”

Platform providers are increasingly supplying data to buy-side traders in order to allow them to make better decisions about how to execute. Where platform-specific data is a necessity, understanding the bigger picture that traders needis leading firms to branch out in their support of best execution. In February, US credit-trading platform Trumid launched a TRACE-based service, Bond Stream, to add another accessible component to the market picture.

“We use anonymised data on our platform to filter information to our users so that they can make more informed data-driven pre-trade decisions,” says Mike Sobel, managing director of Trumid. “Bond Stream expands upon that by incorporating exogenous market data to further help traders do their jobs by being informed in real time about market activity in the bonds they’re focused on. We’ve been delivering targeted platform information; market information is a logical extension. And we’ve blended that with easy and efficient execution, giving users the ability to place orders at the last TRACE print directly from Bond Stream.”

Gareth Coltman, head of product management at trading venue MarketAxess, which also owns market data and post-trade service provider Trax, says that by integrating market data into its platform, the firm can provide traders with dealer responses as well as the current composite price and the last traded price via Trax.

“Once a client has traded on the platform, we package the trade details and market data, including the composite price, into a post-trade message, which flows back into their order management system,” he says.

For firms keen to build a pricing data tool in-house, post-MiFID II Europe will not only see data flowing to regulators and end investors, the regulation will increase the amount of information made public post-trade, bringing it closer to the transparency found in the US market.

Coltman says the demand from clients is increasing, largely around pre-trade pricing data, but with historical pricing data as well.

“There is a combination of indicative pricing from liquidity providers, from dealers, runs data, axes, and any kind of data they can get hold of which is aggregate or composite pricing,” he says. “In addition to clients looking for information about the current level of liquidity around given bonds, clients are also looking for ways to look around historical liquidity – a three-month view might be useful, maybe up to a year.”

Mosaic Smart Data named Best Use of Data and Analytics Innovation at the 2017...
Scroll to top